Landmarks and Beacons Along the Cape

Lighthouses are an iconic part of the Cape Cod landscape, with no less than fourteen standing tall at different points along the 65-mile-long peninsula. Visiting a lighthouse (or several of them!) is a memorable part of any stay in Provincetown, as you’ll get to explore these landmarks that date back hundreds of years, learning about their history while taking in panoramic views of the Atlantic Ocean and Cape Cod Bay.

Today, nine of the lighthouses are open to the public – the other five are now on private property or operated as lodging – and their grounds are open to visitors year-round, with guided tours offered at some during the busy summer season. Although it’s tough to pick favorites, as they all have their unique story, architecture, and location, these are some of our favorite Cape Cod lighthouses. 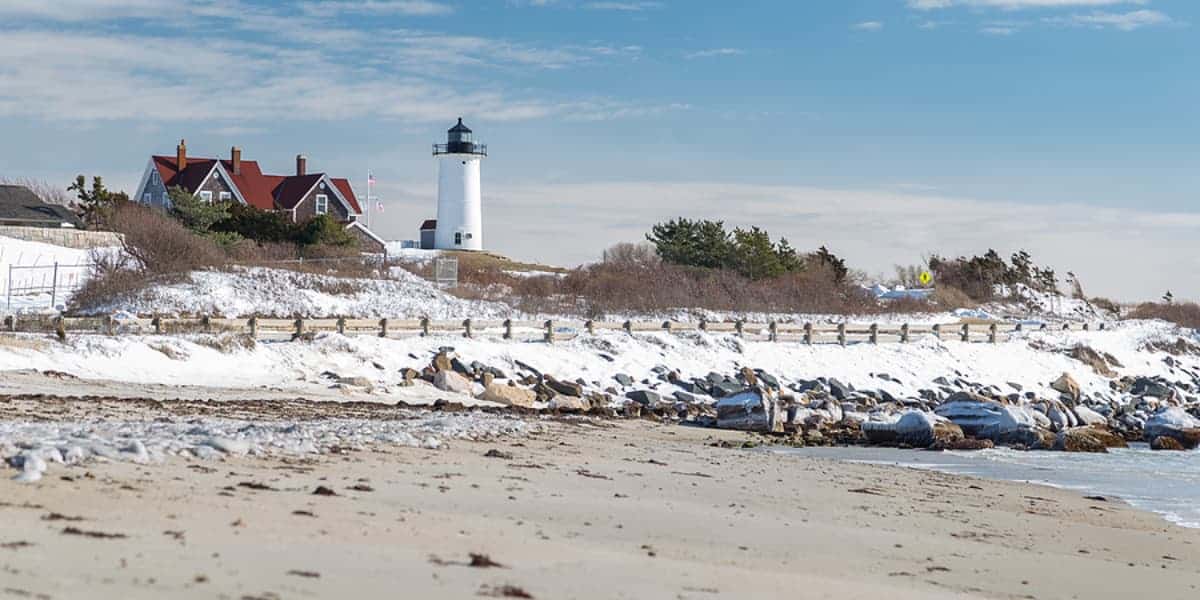 Three lighthouses are within a few miles of Provincetown, each worth visiting. Race Point Light is accessible from the Race Point Beach parking area, just a 3-mile drive or bike ride away from downtown Provincetown, passing through the scenic byways of Cape Cod National Seashore. After parking your car or bike, walk 1.75 miles down the dunes, which are empty and quiet during the winter months. You’ll find the picturesque lighthouse and unobstructed views of the Atlantic Ocean where the dunes end. Once manned by lightkeepers but automated since 1972, Race Point’s fog bells, whistles, and beaming light have guided ships on the outer Cape for over two centuries. Volunteer-led tours take place during summer, but the Race Point grounds are open year-round.

For a more adventurous outing, take an afternoon trip to Long Point Light, which anchors the curving strip of land that makes up the outer edge of Provincetown’s bay/harbor. Once a bustling fishing settlement for the Wampanoag tribe and later for European cod fishermen, it had become deserted by the early-to-mid-19th century. An act of the US Congress provided funding for the lighthouse in 1826, and its fixed green light has guided ships into Provincetown Harbor ever since.

A sidenote and fascinating bit of trivia – each lighthouse has a distinctive light pattern, with Long Point’s being a steady green light, while others, like Chatham Light, blink twice every ten seconds.

Boat shuttles to Long Point leave from MacMillan Pier every hour, or you can walk across the Provincetown Causeway, which starts at Pilgrim’s First Landing Park and extends across the harbor. If you walk there, you can also take a detour to Wood End Lighthouse, located a mile into the 2.75-mile journey to Long Point. Wood End and Long Point share a similar design and are the two most remote lighthouses on the Cape. It’s worth noting that while they do not offer tours like some of the other lighthouses, the grounds surrounding them are always open, with plenty of natural beauty and solitude. 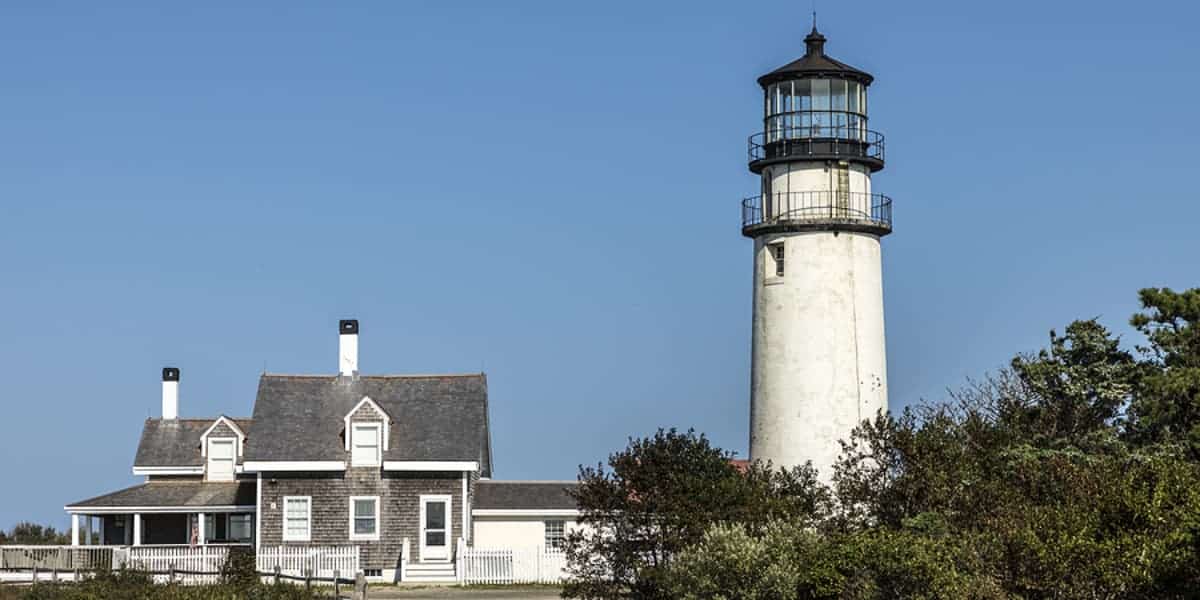 Notable and Distinctive Lighthouses Up and Down the Cape

It’s worth a drive to visit a few other lighthouses along the Cape, either as a day trip or on the way back to the mainland after your stay at Provincetown Hotel.

Highland Light is the oldest and tallest lighthouse on Cape Cod. Initially built from wood in 1797 (commissioned by none other than George Washington), then brick in 1831, and eventually its current 66-foot tall form in 1857, its newly-installed flashing LED beacon reflects how it has evolved over the centuries. Drop-in tours are available from 9:15 am – 4:40 pm from March through October, when you can climb to the top of the tower for unparalleled views.

Nauset Light, well-known as the logo of Cape Cod Potato Chips, is immediately recognizable by its unique half-red, half-white painted exterior. Listed on the National Register of Historic Places, Nauset is one of the world’s most famous lighthouses and a must-add stop to your lighthouse itinerary. Like several other lighthouses, a non-profit leads free daily tours from late May through October – tour days here are Sundays and Wednesdays between 1 and 4 pm. When you visit Nauset Light, stop by Three Sisters, three older decommissioned lighthouses restored by the National Park Service and open to visitors. A pathway connects Nauset Light and Three Sisters, making it easy to see both locations in one stop.

Even further down the Cape, getting closer to the mainland, you can visit Chatham Light and Nobska Light. The beach right near Chatham Light is excellent for swimming in the summertime and birding during any season (migratory birds gather at nearby Monomoy National Wildlife Refuge), while Nobska Light was saved from demolition by the town of Falmouth and is transforming into a maritime museum.

Plan your stay with us, where the Cape’s historic and beautiful lighthouses are just a short walk, bike ride, or drive away!